Last night we decided we would try and ride further today, into the outskirts of Busan, so that on our final 12th day tomorrow we would get to the certification centre early and be able to use the rest of the day for other things. Today would end up being Ethan’s longest distance of riding in his life thus far. 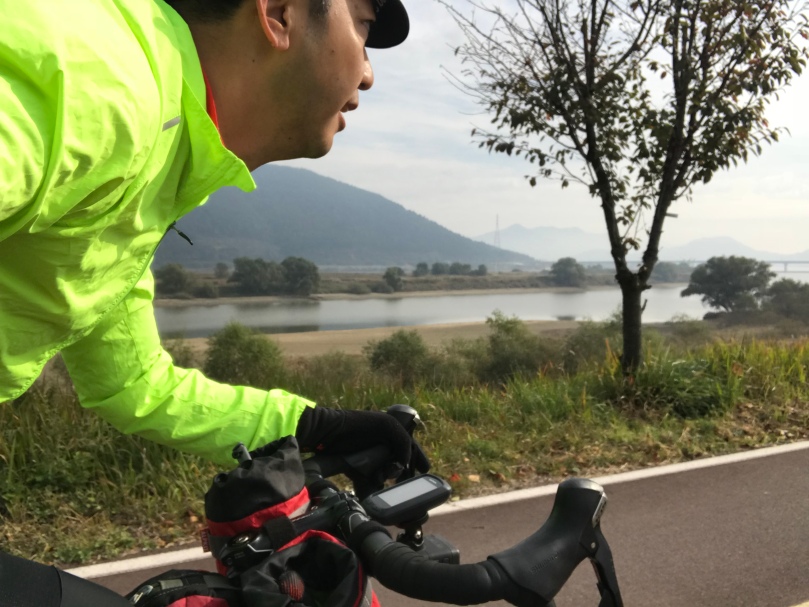 The mornings were warming up as we we nearing the southern city of Busan. Cycling above 10 deg C is much easier! 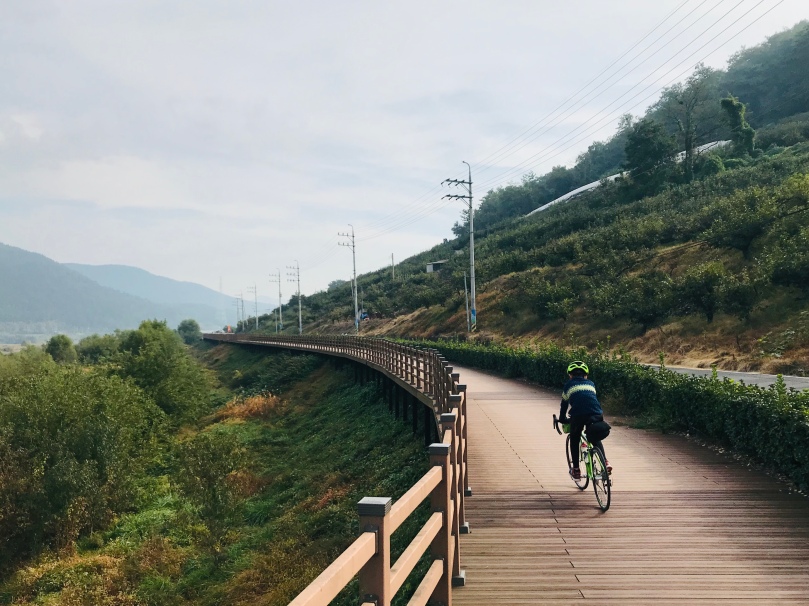 We knew our first certification point wasn’t far so this was something early to look forward to.

Built at a K-Water building, we are always pleased to see a red telephone booth on the cycling path.

The ancient tomb of Haman was here! Ethan laughed and joked that they must have transported him here after he hanged himself! (cf. Book of Esther) 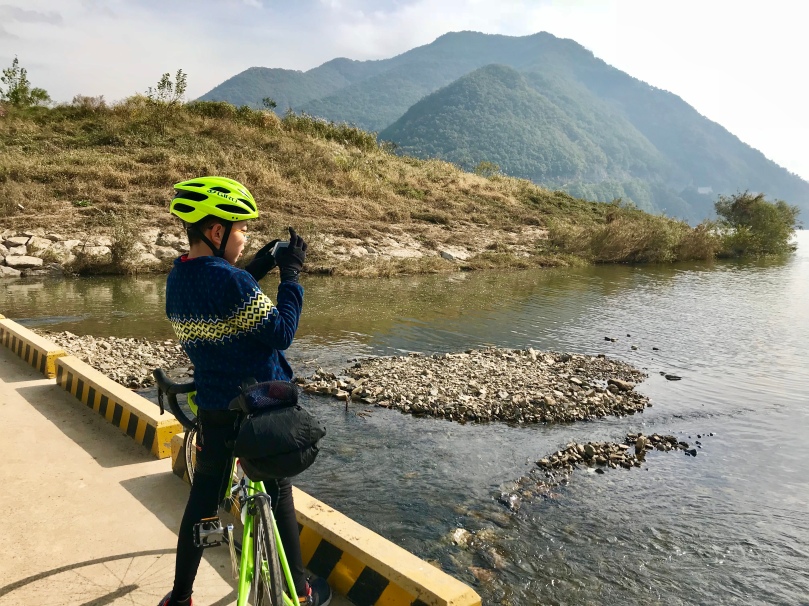 We crossed a low bridge over a gurgling stream and Ethan stopped for photos and videos. I am really glad that he enjoys nature and the first extended use of his first iPhone is to capture these memories. 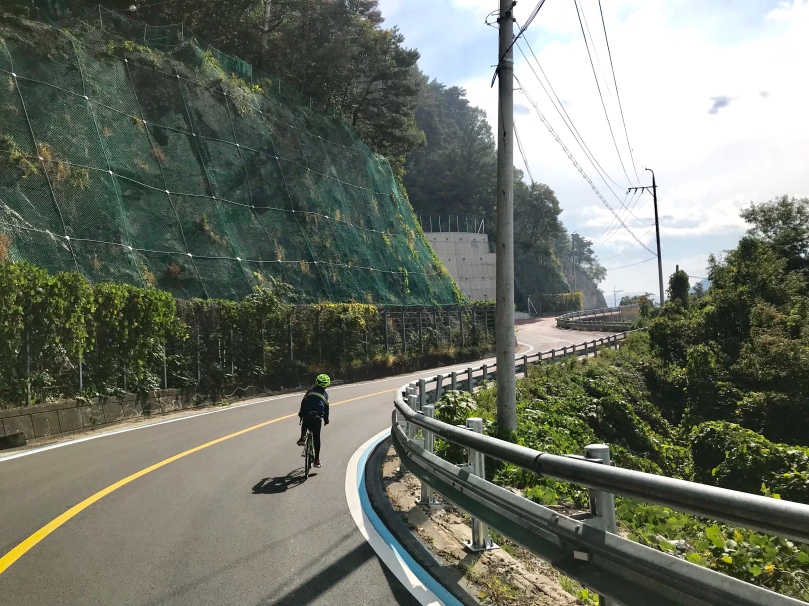 A fast section of beautifully winding asphalt afforded us views of the ocean while we rode up and down the rolling hills.

It had very little traffic, allowing me to give Ethan some freedom to ride and space for me to take wefies! 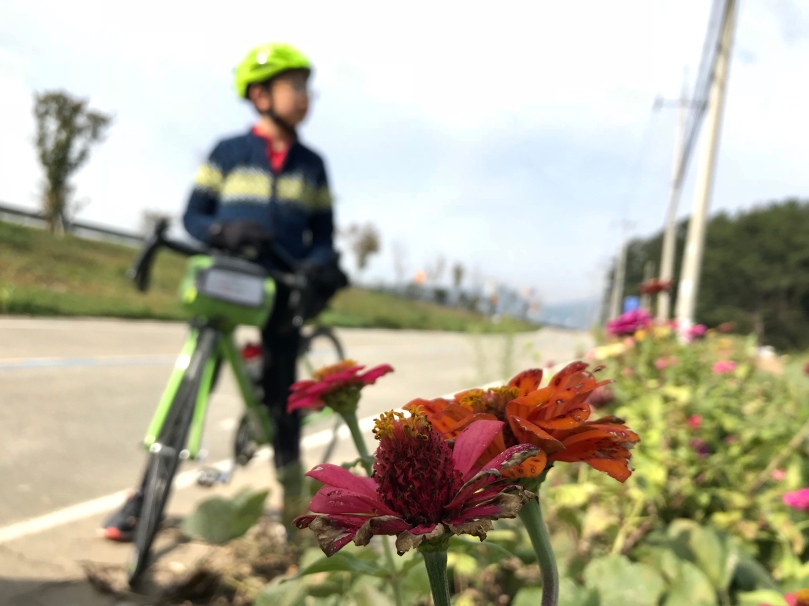 After that we spotted some wildflowers. Ethan also took his own close-up pictures!

We have the exact same expression! Focused but enjoying the morning ride. We had done quite a few kilometers already and I told Ethan we would find a rest stop.

I saw a few cafes on the map and navigated to one, but I didn’t expect such a nice place! In the mid-morning we were the only customers and we happily sat outdoors in perfect weather. 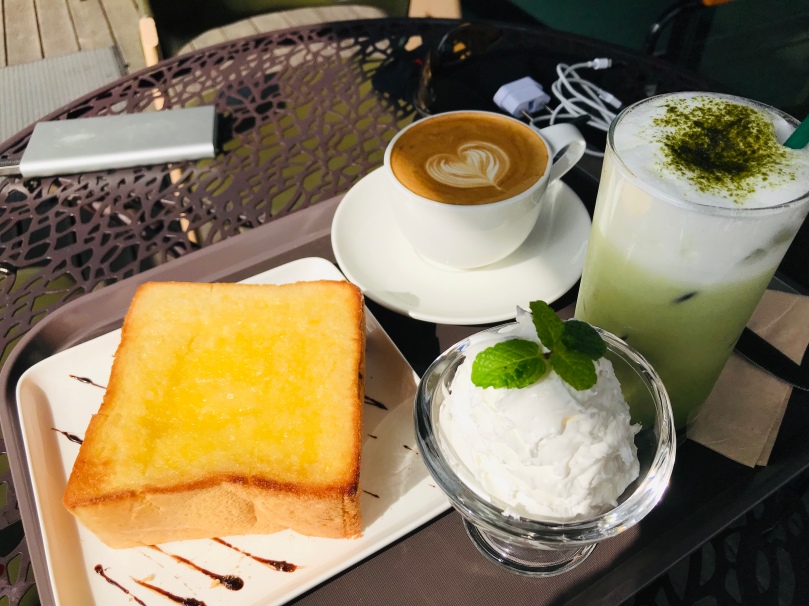 The lady serving us spoke great English and we splurged on a typical Korean cafe fare. The “Honey Bread” (earlier we had seen “Holy Bread” in a probably incorrect translation) makes for great cycling fuel. The whipped cream, coffee and matcha latte doesn’t hurt either. 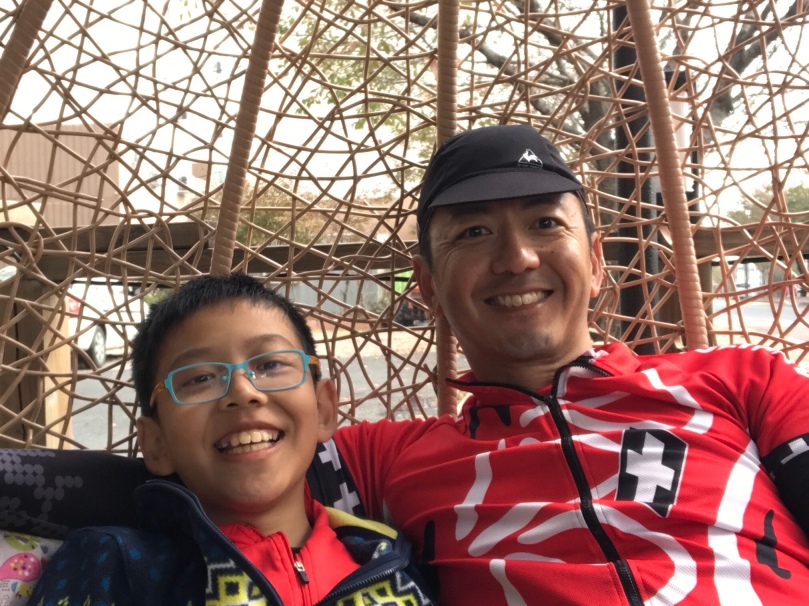 We had a long stay there, 30-45 min and thoroughly enjoyed ourselves. It was my favorite coffee place of the whole trip with good coffee, food and great ambience. There was even a camping trailer next to the cafe and the lady living there had hooked up electricity to the cafe, bought coffee and probably paid for the hookup!

We reluctantly left the cafe but had a great time riding. I love seeing these photos of Ethan in a relaxed road riding posture, enjoying nature, travel and his bike riding.

We had a few more kilometers to go to where I thought lunch would be, when we passed by a very interesting rustic shop. Through the old windows we could see a wooden deck with benches that overlooked the river. We had no idea what they served, but the traditional nature of the place looked fantastic. 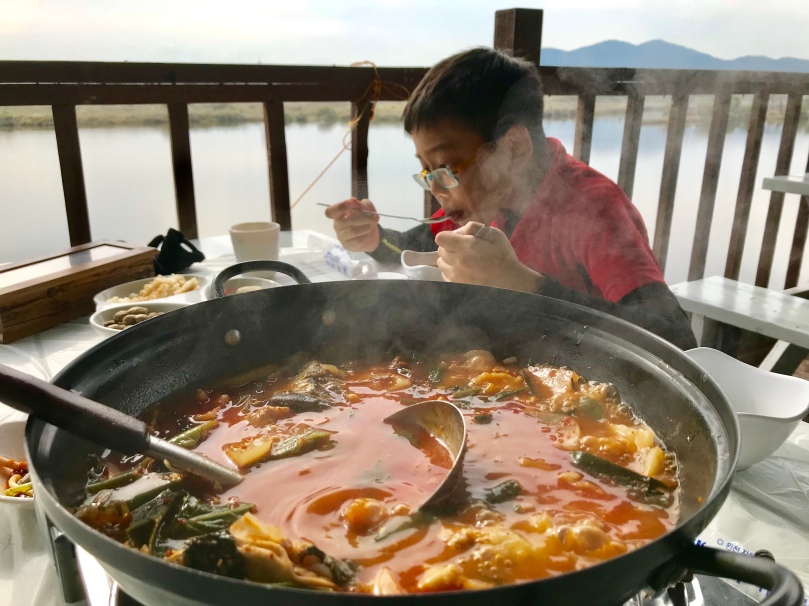 The old lady looked puzzled to see foreign travelers stop at her shop. She tried to explain to us what she had, but instead resorted to giving Ethan a tasting sample. It was a something like a fish head soup which Ethan loved and it wasn’t very spicy. When she saw he liked the rice cakes in the soup she promptly gave us more, and gave extra rice to the hungry cyclists – all for the fixed price of $18. Sitting outdoors by the river, this was one our favorite restaurant lunches! 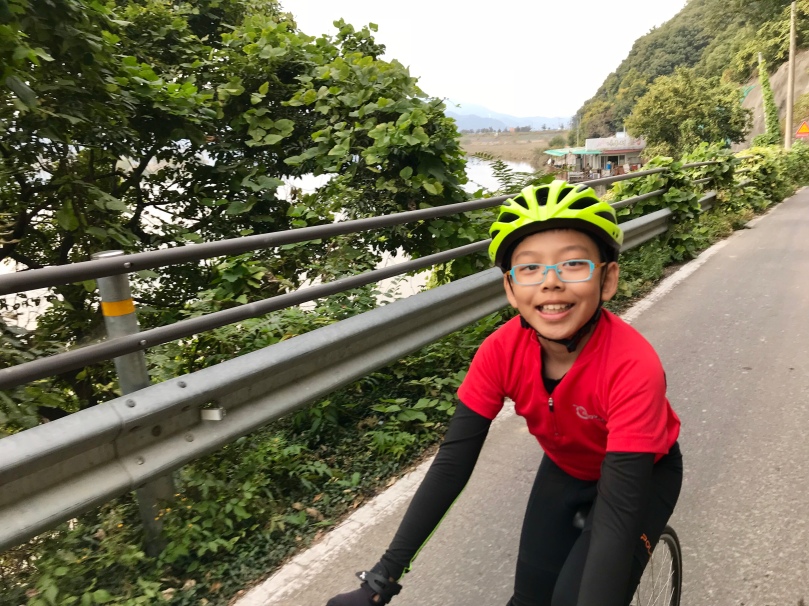 We were both very happy after lunch, having covered good distance, and had great morning and lunch break. We needed to do more as the certification booth was a long way away.

There were two possible routes so we chose one that was longer but looked flatter on Naver maps. Soon we came across a very interesting bench. Not only was it a bicycle, but a bike with a trailer!

For once, Ethan was pulled the trailer while I relaxed!

The road continued to follow the riverbanks as we went the long but flat way towards our destination.

We have lots of nice chats during our ride, telling each other how much we are enjoying each other’s company and talking about life. 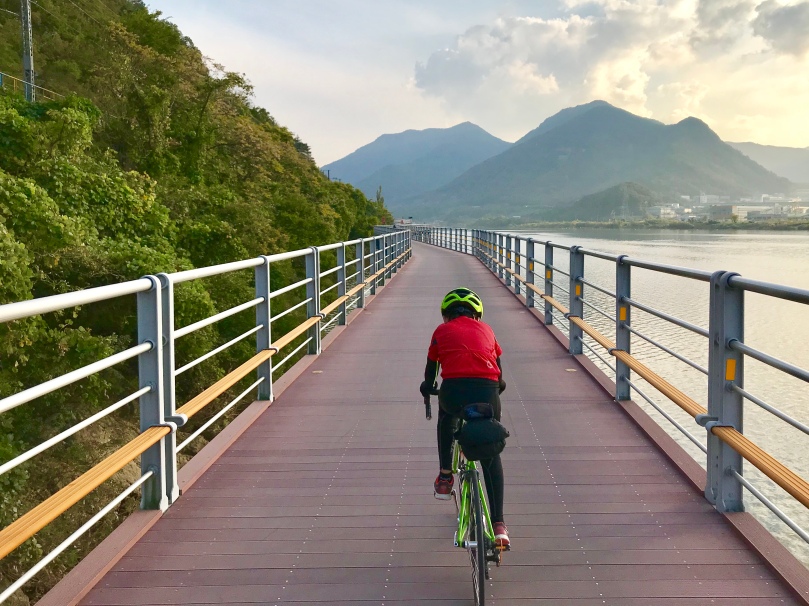 A very long boardwalk stretch cut out the worst of the hills. Our wheels hummed and sang as we rolled along our wooden pathway.

Until finally we could stamp our passports! Here’s a good view of the trailer I pulled across Korea! 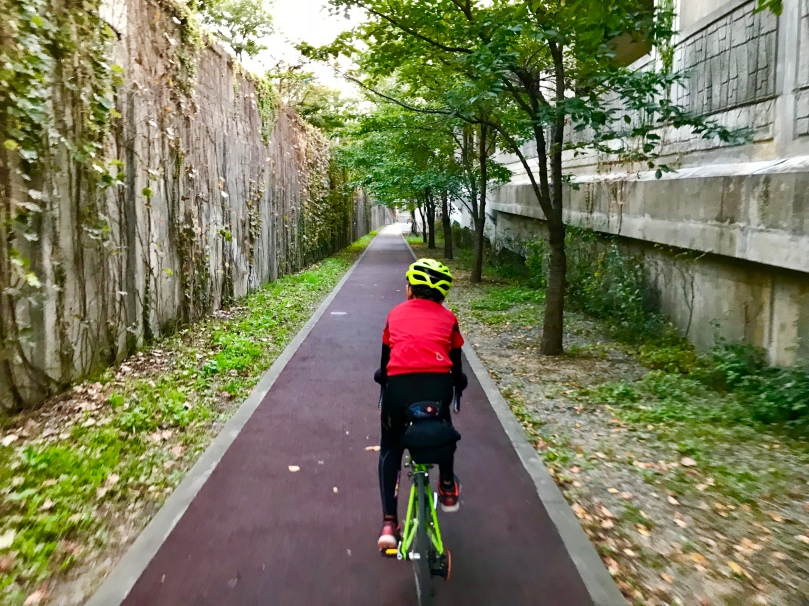 As we approached Busan the cycle path changed quickly. It was still enjoyable but with more stops, buildings and crossing traffic.

We were on one of the main cycle paths leading into the city and great effort had been put into making these enjoyable.

We passed under the huge Korean highways. We don’t build them like this in land-scarce Singapore! 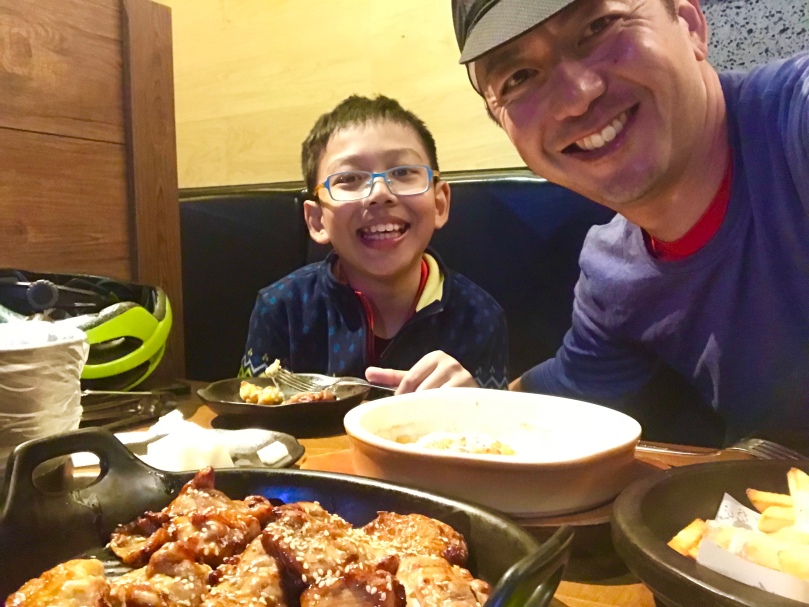 After finding our motel, which was chosen for its reasonable price and being near the cycle path, I discovered there was no food in easy walking distance as it was in an industrial area. So we rode our bikes on another 3km round trip to find this famous chicken shop chain, Okkudak, which has opened in Singapore but we had never tried it before.

By the end of the day, Ethan has ridden 94km. This was our overall favorite riding day. We were just 10-15km from the final certification point so we would be able to finish it early tomorrow morning. We could taste sweet success as we closed our eyes, hugged one another, and feel fast asleep.